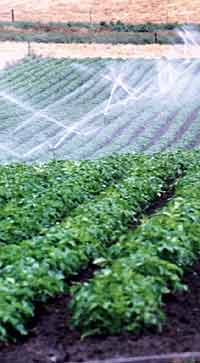 Certified Organic Produce is that grown under the rules of one of the certifying bodies accredited by AQIS which means it is free from chemicals, pesticides and insecticides, sustainable in nature and grown in the most natural way possible.

Under the organic standards food irradiation or genetic engineering is Prohibited

The whole Organic industry is in a growth phase, 15-25% in Australia in 2007, as people everywhere are becoming more aware of the great dangers of chemicals. There are many more people wanting to try organic food as they want more natural taste, the biggest problem often is its availability.

Organics is not 2nd grade produce grown by "backyarders", as it once seemed to be, but now the quality must be there or it will not sell. And gone are the days where people can sell non organic produce as organic, now there are more checks, more competitors watching increasing the accountability.

There are wholesalers and retailers in every state buying, selling and promoting the values of Organic produce. But the demand generally outstrips the production as more people try the natural taste of organic produce.

l. To Protect Future Generations
"We have not inherited the earth from our fathers, we are borrowing it from our children" -Lester Brown. The average child receives four times more exposure than an adult to at least eight widely used cancer-causing pesticides in food. Food choices made now, determine your child's future health.

2. To Prevent Soil Erosion
Soil is the foundation of the food chain in organic gardening. In conventional farming, however, the soil is used more as a medium to hold plants in a vertical position, so they can be chemically fertilised. Soil structure is neglected and the top-soil is washed or blown away.

3. To Protect Water
Quality Water makes up two-thirds of our body mass and covers three quarters of the planet. Pesticides and other chemicals widely contaminate ground water and rivers and pollute our primary source of drinking water.

4. To Save Energy
Modern farming uses more petroleum than any other industry. More energy is now used to produce synthetic fertilisers than to till, cultivate and harvest crops. Organic farming is still based on labor intensive practices such as hand weeding, green manure and cover crops instead of chemicals.

5. To Keep Chemicals Off Your Plate
Many pesticides and herbicides were registered long before extensive research linking them to cancer and other diseases could be established. They are poisons designed to kill living organisms and can also harm humans. In addition to cancer, pesticides are implicated in birth defects, nerve damage and genetic manipulations.

6. To Protect Farm Workers
Farmers have a much larger risk than non-farmers of contracting cancer. Farm worker health is also a serious problem in developing nations, where pesticide use can be poorly regulated. An estimated one million people are poisoned annually by pesticides.

7. To Help Small Farmers
Most organic farms are small, independently owned family farms of less than 100 acres. Many family farms have been lost this past decade. Organic farming could be one of the few survival tactics left for family farms.

9. To Promote Biodiversity
The conventional farmer uses monoculture, the planting of large plots of land with the same crop year after year. This approach leaves the soil lacking in natural minerals and nutrients, which have to be replaced by chemical fertilisers in increasing amounts. Single crops are also more susceptible to pests, making farmers more reliant on pesticides. Insects have become genetically resistant to certain pesticides and despite the increased uses of chemicals, crop losses are increasing. Organic farmers encourage natural predators on their farms and are content with a smaller harvest. They also practice crop rotation to add health and energy to the soil.

For a look at the Organic Standards which apply in Australia see server.green.net.au/ofa/domestic.html